The Detroit Chapter of Black Data Processing Associates is providing transportation to take jobseekers to the National BDPA IT Career Fair in Raleigh, N.C. Aug. 7-9.

The event features 40 to 50 hiring companies with placement all over the United States.

More about the career fair at http://www.bdpa-detroit.org/Career2009.html.

For additional info, please contact Beverly Person at Detroit-VPMM@bdpa-detroit.org or (313) 438-3519.

One of the best kept secrets in Michigan IT is trying to fix that little problem of visibility.

Mostly because, the phrase of one of its founders, it can't hire people fast enough.

Security and connectivity provider Nuspire Networks Inc. was founded in 1999 by Saylor Frase and Steve Whitener as a spinout of Frase's Web development company, which he started as a Central Michigan University student in 1996.

Nuspire's first work was connecting hospitals to small clinics securely using Virtual Private Network technology, which some then doubted could be trusted to do the job. Relationships to handle connectivity for bigger tech companies like Unisys and IBM brought them to the attention of General Motors Corp., which in 2000 began using Nuspire to provide connectivity with dealers.

"To this day we still run that portion of connecting GM with dealers," Frase said.

More recently, the company has taken on work for Subaru, SPX Corp., InkStop stores and Fox TV. Those customers keep Nuspire scrambling -- they've kept up with InkStop's 300 percent annualized growth, for instance, by figuring out a way to complete a data phone infrastructure for a new store location in two weeks.

And three months ago, the company hired its first marketing and sales department.

"We never had a sales force up 'til then, but our products and services have now matured enough, and we see deals in the media now where we say, 'Wow, we should have competed for that,'" Frase said. "We're trying to raise our profile."

"We can't hire people fast enough, and it's neat to be with a Michigan company that has that problem," company marketing director Jim Hebler said.

More from the Great Lakes IT Report.

Emotions are sometimes strange, volatile, and unpredictable. They do not always respond to logic and reason. They do, however, respond to action. If you have occasional feelings of loneliness, discouragement, or discontentment, the best way to kill such negative emotions is to work them to death. Almost nothing is as bad as it first seems, and there’s nothing like a hard day’s work to put everything in proper perspective. When you begin to feel negative emotions, dwelling on your misfortunes only makes you feel worse. Do your best to put them out of your mind and think about more positive, constructive things. Physical labor can help. Choose a task that doesn’t require a great deal of concentration, and then focus on accomplishing the task at hand.

This positive message is brought to you by the Napoleon Hill Foundation. Visit us at http://www.naphill.org. We encourage you to forward this to friends and family.
Posted by C Samuels Jr at Monday, June 29, 2009 No comments:

Email ThisBlogThis!Share to TwitterShare to FacebookShare to Pinterest
Labels: FoodforThought

An Interview with Stephen Wolfram

By David Talbot - July/August 2009
In an interview with David Talbot, Technology Review’s chief correspondent, Stephen Wolfram describes what motivated him to launch Wolfram Alpha, how the “knowledge engine” works, and where it’s headed.

“Things are only impossible until they're not.”
~Jean-Luc Picard in Star Trek: The Next Generation
Posted by C Samuels Jr at Wednesday, June 17, 2009 2 comments:

20 most useful career sites for IT professionals

There’s always been an inverse relationship between density and durability when it comes to data storage. Today’s silicon memory chips contain a lot of density, but with a lifespan of just a few decades, they lack durability. Yet primitive forms of storage such as information carved in stone are highly durable, however, they are not dense. Now this long-standing negative correlation between density and durability has been blow to bits with the development of a new memory device that can pack a trillion bits of data into one square inch of medium and retain that data for a billion years.

Led by physicist Alex Zettl, researchers with the U.S. Department of Energy’s Lawrence Berkeley National Laboratory (Berkeley Lab) and the University of California (UC) Berkeley, have created a digital electromechanical memory device that consists of a crystalline iron nanoparticle shuttle approximately 1/50,000th the width of a human hair enclosed within the hollow of a multiwalled carbon nanotube. The shuttle can be moved reversibly via a low-voltage electrical write signal and can be positioned with nanoscale precision, forming the basis of a binary sequence. 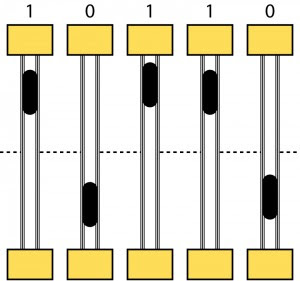 The nanoscale electromechanical memory device can write/read data based on the position of an iron nanoparticle in a carbon nanotube. The memory devices here are displaying a binary sequence 1 0 1 1 0 (Credit: Zettl Research Group)

“Through this combination of nanomaterials and interactions, we’ve created a memory device that features both ultra-high density and ultra-long lifetimes, and that can be written to and read from using the conventional voltages already available in digital electronics,” Zettl said. “Furthermore, as the system is naturally hermetically sealed, it provides its own protection against environmental contamination.”

A paper by Zettl and team provides the specifics of the research where you can learn more of the technical details, but here’s the key takeaway: “The position of the shuttle can be read out directly via a blind resistance read measurement, allowing application as a nonvolatile memory element with potentially hundreds of memory states per device. The shuttle memory has application for archival storage, with information density as high as 1012 bits/in2, and thermodynamic stability in excess of one billion years.”

Below is a short video that shows an iron nanoparticle shuttle moving through a carbon nanotube in the presence of a low voltage electrical current. The shuttle’s position inside the tube can function as a high-density nonvolatile memory element.

Some of the insipiration Zettl and his team drew upon to develop the new memory storage technology could be found in the irony of modern storage. In the paper, Zettl wrote: “Interestingly, the Domesday Book, the great survey of England commissioned by William the Conqueror in 1086 and written on vellum, has survived over 900 years, while the 1986 BBC Domesday Project, a multimedia survey marking the 900th anniversary of the original Book, required migration from the original high-density laserdiscs within two decades because of media failure.”

Zettl thinks the technology could be on the market within the next two years with sginifcant impact. But he’s not alone. A similar proprietary memory technology called NRAM or Nano-RAM that blends carbon nanotubes with conventional semiconductors appears on the brink of commercialization.

This research was primarily supported by the U.S. Department of Energy’s Office of Science through its Basic Energy Sciences programs.

If the name sounds familiar, you may recall that Zett’s team created the carbon nanotube radio.

HIGH WAGES AND THE CAPACITY TO ASSUME RESPONSIBILITY ARE TWO THINGS THAT BELONG TOGETHER.

It’s been said that a leader’s job is to inspire others to high levels of achievement, while a manager’s job is to protect the assets of investors. The most successful people are those who recognize the similarities and differences between leadership and management responsibilities, fulfilling both with equal skill and aplomb. When they do, they realize the rewards that are commensurate with their efforts. When you cheerfully accept responsibility for your own actions and do your job in a way that protects the interests of your employer, you will soon be entrusted with more and more responsibilities. And those who have the capacity to assume responsibility-for the success of the project or organization-will always be paid the highest salaries.

Cisco had been expected for months to replace a Dow component. The move means that Cisco, the tech bellwether with a market cap of $112 billion, is a stable and key indicator of the nation's and globe’s economy.

Quoting a statement from Wall Street Journal Managing Editor Robert Thomson, the AP said Cisco was added to the Dow because its products are "vital to an economy and culture still adapting to the Information Age - just as automobiles were essential to America in the 20th Century." It may also signal the increasing influence of tech stocks in the Dow.

GM, which had been one of the index's 30 blue chip stocks for 83 years, was removed after filing for Chapter 11 today. Citigroup was removed because it is undergoing a significant restructuring following the credit crisis, which precipitated the current economic recession.

The U.S. government will have a substantial stake in Citigroup after the restructuring.