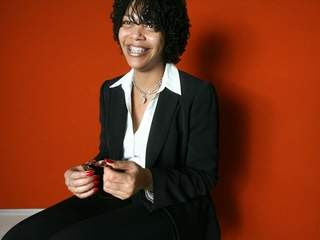 Eatonia Williams was working for the Detroit Public Schools, doing lessons on conflict resolution and peer mediation, when she realized one of the junior high kids sitting at the front of the class had a problem.

"She did a lot of squinting," said Williams, 37, of West Bloomfield.

"Her work was just, really, she was failing. One day I asked her, 'Do you wear glasses?' She said, 'I don't have them, I lost them, my mom can't really buy them for me right now.' "

Williams also was working part-time at an optical shop. She and some of her coworkers there pitched in and bought the girl a pair of glasses.

The girl's work in class improved.

Excited about how big a difference a pair of glasses can make, Williams decided to create a charity that would give glasses to kids in need, because "you can't be successful in school if you can't see."

But one thing led to another and life went on.

She didn't do much with her project until last fall when she got a call from an old friend.

Kirsten Bedard of Lake Orion told Williams the optometrist she works for had more than 300 pairs of never-worn kids' and adult frames to donate to a worthy cause.

"Why not do something like that with them rather than just pitch them?" said Joe Ales, optometrist and owner of Optik Birmingham, who donated the frames.

"This is one of the more needy communities in the country, this area, Pontiac, Detroit in particular."

Williams got her pastor, the Rev. Douglas Jones of Welcome Missionary Baptist Church in Pontiac, involved in the glasses giveaway.

She put notices in the church bulletin and spread word around town: free frames for anyone who couldn't afford to buy them.

She got a lab and another optometrist to do exams at reduced rates. "Everybody pulled together and did their piece," she said.

As for the recipients: "They were just ecstatic. They were very excited."

Stacy Gay of Pontiac was one of the people who received new glasses at the giveaway in late November. Her old glasses were accidentally broken and then thrown away in October by her 5-year-old son, Rishard. "My insurance would not cover lost glasses and I did really need them," she said.

"When the announcement was made at church I knew this was a blessing. This way I did not have to wait until July to get a new pair of glasses. This saved me months of not being able to see," Gay said. "It was a super-duper great idea. It would be great if the program was ongoing."

Williams -- who was laid off from her job at EDS on Dec. 1 -- has recommitted to her project. She has time now and is thrilled so many people are happy with their new glasses.

She's been talking with her pastor about opening a discount eyeglass store in a church-owned building. She's working on a business plan.

I've known Eatonia since she joined the National BDPA Board of Directors back in the day. Her kind heart and good nature have been obvious in her volunteer work as a BDPA leader. I'm not surprised that she has found other outlets for her 'good works'...

I'm very proud of the positive example that Eatonia is setting for all BDPAers...