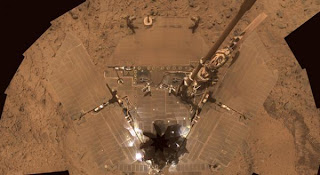 "This means Spirit has not gone into a fault condition and is still being controlled by sequences we send from the ground," said John Callas of NASA's Jet Propulsion Laboratory, Pasadena, Calif., project manager for Spirit and its twin, Opportunity.

The solar-powered rover still has low energy, a condition worsened by a dust storm in recent days. Today's communication confirmed that Spirit had received commands sent on Tuesday and that the battery charge had not fallen low enough to trigger a pre-programmed fault mode.

Callas said, "The baby is crying, which means it is healthy enough to communicate normally. Now we are analyzing the data we've received to determine what the next commands should be, but this is all good news."

Spirit has been operating on Mars for nearly five years in an exploration mission originally planned to last three months. The recent dust storm is clearing, but a coating of dust on Spirit's solar panels is reducing the rover's ability to generate electricity even when the sky is clear.

JPL, a division of the California Institute of Technology, Pasadena, manages the Mars Exploration Rover project for the NASA Science Mission Directorate, Washington.