Star Trek: The Experience closing down

The rumors are true.. I was able to visit the Experience a couple of times and eat at Quark's. I hope it returns at a bigger an better venue in the future.
Live Long and Prosper, Star Trek will return.

-- After a decade at the final frontier, Star Trek: The Experience is going where no Las Vegas Strip attraction wants to go. 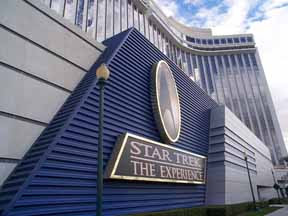 With a decommissioning ceremony -- as befits any great vessel -- the exhibit and its replica of the starship Enterprise are closing Monday.

Thousands of trekkies are "beaming up" from across the United Federation of Planets, er, the United States and around the world one last time, according to exhibit spokesman Chad Boutte.

Some seek a final encounter with the Borg, the television show's race of organic robot aliens who tell everyone "resistance is futile." Others just want to share a farewell drink -- likely a stiff Warp Core Breach, with 10 ounces of rum -- with fellow fans at the attraction's restaurant.

Employees dressed as aliens discuss the minutiae of their worlds' mythologies with visitors who learn, in typically circular trekkie logic, that the exhibit is a "time station" for transporting researchers and equipment between the 21st and 24th centuries.

For $49.99, fans can enjoy two virtual rides and the Museum of the Future, with costumes, "phasers" and Mr. Spock's coffin. More than 3 million people have come through since the Experience opened in 1998.

In the end, the frontier the USS Enterprise couldn't breach was earthly: The attraction's owner, Cedar Fair Entertainment Co., and the Las Vegas Hilton, its landlord, couldn't agree on a new lease. They worked as a typical landlord and retail tenant, with Cedar Fair keeping all revenue from the attraction, said hotel spokesman Ira David Sternberg.

Trekkies are incensed. They've scrawled reminiscences about the exhibit on the walls inside, and they're calling Cedar Fair and the hotel to complain. But their online rumor that the space the exhibit occupies will become a theater for pop star Michael Jackson is unfounded, Sternberg said. He said nothing's decided.

Karen and Eric Klein, from Easton, Pennsylvania, had planned to renew their wedding vows at the Experience on their 10th anniversary but came this week instead, four years early.

A Federation captain told them during the ceremony on the bridge of the Enterprise that the energy between them created their love.

"He had his own schtick, and it was very beautiful, and it actually made the moment even that much better," said Eric Klein, 39, still holding his wife's hand outside the gift shop. "It wasn't simply being on the bridge, it really felt very emotional"

Perhaps a year premature. Star Trek has had nothing in the media to promote themselves lately but next year with the 2009 motion picture with all the young cast, it should reboot the whole franchise.