In the new global economy, America needs a workforce with the knowledge and skills to compete. A new workforce of problem solvers, innovators and inventors who are self-reliant and able to think logically is one of the crucial foundations that drive innovation capacity in the nation. A key to developing these skills is strengthening science, technology, engineering and math (STEM) competencies in every student and worker. 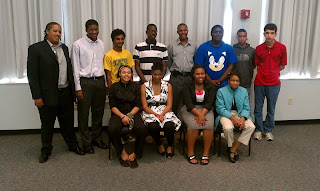 BDPA stepped up to the challenge by hosting a BDPA Midwest Regional High School Computer Competition (HSCC) and IT Showcase held at Cincinnati State Technical College on June 11, 2011. Students from Cincinnati, Columbus, Detroit and Los Angeles gathered for an opportunity to compete in oral exams, written tests, presentations and web-based design/programming projects.

Cincinnati Bell chief information officer Kevin Murray visited the regional competition to personally observe the work being done by the students. He noted that one of the high school students on the Cincinnati team recently accepted a summer internship within the Cincinnati Bell information technology department. He is looking for an opportunity to create a collaborative experience in the coming weeks and months between BDPA, Cincinnati Bell and Taft Information Technology High School.

Many of the students in this weekend's regional HSCC championship will have opportunity to travel to Chicago later this summer for the 26th annual National BDPA HSCC Championship in an effort to dethrone the 4-time defending HSCC champions from Rochester, Minnesota.

Another inspiring aspect of the event was the BDPA IT Showcase. This event aspires to create young people with skills and interest in pursuing STEM-based Ph.D. degrees after they graduate from college. There are too few people of African descent getting doctoral degrees in computer science and other STEM-based curriculum. BDPA hopes to create a pipeline of such academic superstars with its BDPA IT Showcase. 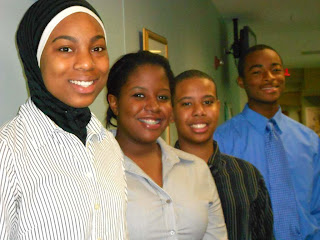 The four Cincinnati-based students who participated in the IT Showcase were: Jahaan Maiden (University of Cincinnati), Li-Ara Jackson (Mason HS), Landon Jackson (Mason HS) and Tariq Maiden (University of Cincinnati). These young people gave detailed presentations on a variety of topics including: 'History and Current Uses of GPS', 'Virtual Reality in Second Life' and 'How Global Processing Units Have Changed the World'.

The parents, volunteers, judges and sponsors were inspired by the performance of all the students who traveled by highways and cyberspace to participate in the BDPA Midwest Regional HSCC and IT Showcase. The hard work put in by Joseph Parker (Procter & Gamble) and his planning committee paid off in a major way. 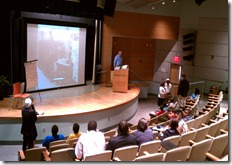 BDPA is committed to prepare our children for careers in science and engineering much begin long before they are of college age. BDPA has a number of programs that enrich the pre-college STEM curriculum in the nation’s K-12 school systems, and encourage young students to take the requisite courses for careers in those fields. While the lack of preparation crosses all demographics, it is particularly acute in under-served communities.

We encourage you to find a way to support BDPA programs as either a volunteer or donor. Please contact BDPA Education and Technology Foundation executive director Wayne Hicks on (513) 284-4968 if you have questions or wish to discuss further.
Posted by C Samuels Jr at Monday, June 13, 2011